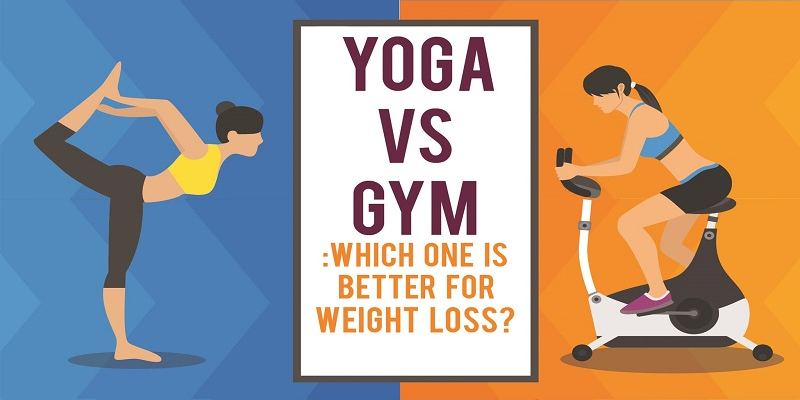 Yoga is said to be an antiquated art for physical and psychological wellness. Whereas, the gym focuses more on physical exercise and weight reduction. Individuals once in a while get confused with respect to which one is better: yoga or gym?

In fact, the physical aspects of yoga, the asanas, are an auxiliary part of the practice. Moreover, these asanas differ greatly from regular physical exercises both in their mode of performance and in the results.

Yoga focuses more on steady postures and relaxation of muscles. Patanjali defines an asana as, “a steady and comfortable state.” The movements are slow and controlled; the breathing is synchronized. In regular exercise, the emphasis is on movement and stress on the muscles. Exercise usually involves repetitive movement where synchronized breathing is absent, even though we may try to control the breathing pattern. As a result, the effects of yoga and exercise differ.

Exercise: Exercise usually focuses on increasing muscle mass. As a result, the length of the muscle shortens, and flexibility decreases. When we exercise, we use a lot of energy.

Yoga: In yoga, once the asana has been attained, the body is relaxed and blood requirement is reduced. This relieves the stress on the heart.

Exercise: In exercise, the effect is the opposite. Ordinary exercise puts a strain on the muscles. This increases the speed of blood circulation and blood pressure, which in turn increases the workload on the heart as it needs to pump faster.

Yoga: In yoga, the body is in a relaxed state, so the workload on the respiratory system is reduced.

Exercise: The constant movement in regular exercise increases the oxygen requirement in the muscles. This increases the speed of breathing, causing the lungs to work harder.

Yoga: Yoga boosts the immune system by increasing the number and functioning ability of immune cells.

Exercise: While this is true for exercise as well, it usually depends on the nature, intensity, and duration of exercise.

Yoga: Yoga reduces the cortisol levels in the body. Cortisol is a hormone produced from cholesterol that is linked with perceived stress.

Exercise: Exercise may actually increase cortisol levels in the body because the body perceives exercise as stress.

Yoga also promotes better cognition through specific nostril breathing; this is absent in regular exercise. After yoga, the body experiences relaxation due to the soothing effect on the nervous system. Exercise leads to the production of lactic acid, which may cause fatigue and exhaustion. Other benefits of yoga that are absent in exercise are increased pain tolerance, control over impulsive behavior, and resetting the biological rhythm. Overall, yoga provides most of the benefits of exercise and in addition, also improves subjective aspects such as peace, contentment, and happiness.